More than 30 people responded to the young and active guys from Tirza, in the central part of Latvia and came together to tidy the open-air dais and its premises – the usual venue of concerts and all kinds of festivities. As Anete Ziepniece, the coordinator of the local grassroots activists (they call themselfes "Cloud pushers" or fantasts) told us, the youngest participant was only four months young, but the oldest had just celebrated her 50th bithday. 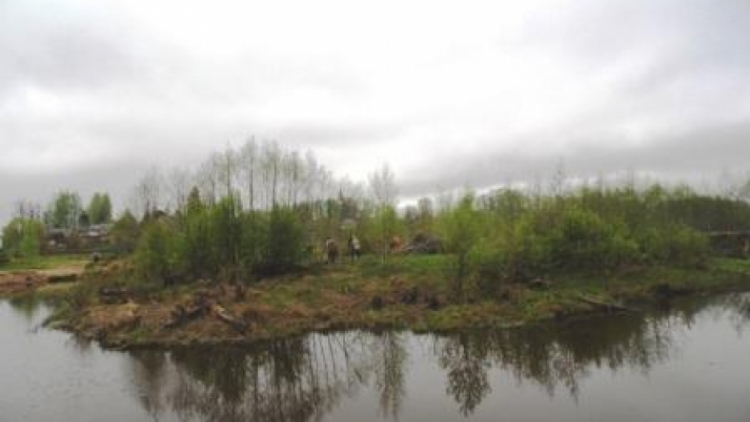 "Saws were growling, rubbish and old branches burnt in a fire, and in three hours time the islet next to the dais was clean again. When the redundant shrub was cut, it was the right time for the local graffitti painters to start their work," Anete explains. The young artists Jekabs and Rudolfs united those who had never drawn a graffiti in an arts workshop, and the paintings they made in joint work was a real surprise to all of them. Even the old ladies who had never liked "the hooligans messing about the clean and freshly painted houses", agreed that the making of the graffiti wall was a good idea.

"That was a great day, we enjoyed a friendly and optimistic atmosphere, and the sausages roasted on the fire after the work was done, were delicious!" Anete Ziepniece adds. All the participants became better friends and un understood that it is possible to do great things when the local people come together and perform voluntary activities in order to make their dwelling-place cleaner and more beautiful.

It should be noted that the idea about painting the graffiti wall was born during the poll carried out among the people of Tirza in January 2013 and the 2nd Forum of the Tirza district population in February. As a result several local people donated timber for the pedestrian bridge, new benches and tables near the dais.

By the way, the dais was built on the most beautiful place of Tirza – on an islet in the middle of the river Tirza during the 1970s by the local people on voluntary basis. During the last decades the lace had lost its beauty as the local administration lacked money for decent up-keeping of the place, the passenger bridge had been ruined and the beautiful premises – neglected. The local grassroots activists have decided to proceed with the cleaning and maintenance works and to establish a tent settlement place next to the dais during the next voluntary days of joint work, Anete Ziepniece concludes. She also asked us to express the biggest appreciation to Kaspars, Valerijs, Endijs and Ilgvars for their technical assistance. "I am thankful for the cooperation of the Tirza people! I am sure that I will participate also at the next joint-work activities, as the first attempt has already united the local people of different generations. For me personally this was a great chance to venture and organize something new," admits Anete, the local grassroots coordinator.

Students as co-creators of their own learning: teachers’ perceptions and practice

Evaluation for the Latvian language courses