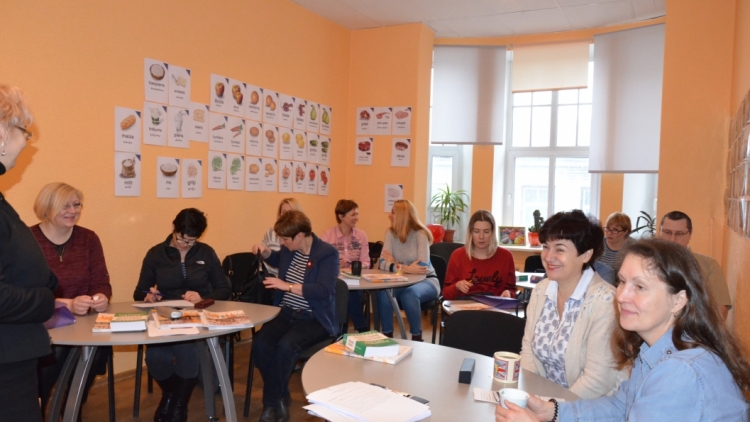 The length of the course is 120 hours but already after a months of starting the course a person who did not know a word in Latvian is able to tell about him/herself, his/her occupation and family, is able to understand that nouns in the Latvian language have endings and tries to use them correctly in the right case: Accusative, Locative and Dative as well as the anxiety about the examination to be passed after two or three months increases. 97 people who have arrived from Russia, Ukraine, Uzbekistan, Byelorussia, Azerbaijan, Israel, China, Venezuela and Turkey and settled in Latvia continue mastering the Latvian language (A and B levels) also in February. Aija Kalve who is the pedagogical leader of the project is telling more:

Visiting all the groups in February allows concluding that the participants continue having high motivation to learn the Latvian language and it largely has been ensured by the quality of the Latvian language classes. The teachers of the Latvian language apply purposefully different methodological strategies (games, discussions, presentations, video/audio materials, music, pictures) and forms of organizing learning in their classes so that everyone was involved in the process of learning. Positive atmosphere dominates in the classes and the participants’ willingness to engage is felt. A positive aspect of learning is the differentiated approach which ensures the satisfaction of each participant’s needs in the language acquisition implemented by teachers.

During the discussions after the classes the course participants admit: “I like the classes because every time I receive new materials”, “I am coming to classes with joy because they are interesting”, “Here we live and learn friendly way”, “I learn many new things”, “I learn to learn”, “I am already able to answer questions”. The participants also pointed out what they had already learnt, how they felt and why they considered it important to attend the classes. Yet the most important is that these people learn the Latvian language with pleasure!

The Education Development Center project “Living in Latvia - learning Latvian” (Nr. PMIF/6/2016/1/02) is implemented within the 2014 – 2020 planning period of the European Union Asylum, Migration and Integration Fund with the joint funding from the European Union (75%) and Latvia state budget (25%).

Students as co-creators of their own learning: teachers’ perceptions and practice

Evaluation for the Latvian language courses